The Town Take Three Points Courtesy Of A 3-2 Win Away At Camberley Town.

Statistics show that there is, in fact, no such thing as a ‘new manager bounce’.

Teams usually replace their manager when they’re in a slump – typically averaging around one point per match.

All that then happens is that results simply regress to the mean – up to an expected average of 1.3 points per match.

Simply put, for every Antonio Conte at Tottenham, there’s a Dean Smith at Norwich.

But try telling that to the Farnham fans who saw the Town win 3-2 at Krooner Park.

They’ll tell you that the Tony Reid Revolution is bouncing like Tigger on steroids.

This was a one goal win that should have been far more comfortable.

On a playing surface that brought back memories of mud-bath pitches from the seventies, Farnham absolutely dominated the first half, yet somehow found themselves a goal down after 14 minutes when a Max Meaton back pass was completely miskicked by the Town ‘keeper Justice Owusu allowing the Camberley Town forward the easiest of opportunities to put the home side ahead.

And it could have been worse two minutes later when Owusu redeemed himself by turning a snap shop off the post for a corner.

This was a scoreline that simply didn’t make sense.

The Town were dominating the midfield with the double pivot of Arsen Ujkat and Ben Bauchop looking particularly impressive, allowing Omar Nyame to roam between them and a lively, probing, front three of Josh Oguneye, Max Blackmore and the returning Owen Dean.

Playing with such assurance, there was no way that the Town should be behind, and parity was rightfully restored on 21 minutes when striker Max Blackmore scored his second for the Town, towering above his marker to meet a Tom Smith corner with a powerful header.

For the rest of the half it was all one way traffic, yet Farnham failed to find a second goal and, frustrated, they ended the half level.

The second half started in the same vein with the Town completely on top and, finally, they took the lead on the hour mark when the lively Omar Nyame was brought down just outside the area. Tom Smith swung the free kick to the far post for Cavin Atkinson to head it back across goal to find match skipper Greg Haydon waiting in the six yard box to chest it home.

Ten minutes later, it was Nyame who would go on to seemingly make the match safe for Farnham by scoring the goal of the match, beating a couple of Camberley players before finishing with a composed strike from just outside the area.

That should have been that, but, this being the Town, there was still time for a hiccup.

It came just ten minutes from time when ‘keeper Owusu completely misjudged what appeared to be a mishit cross from the Camberley right, allowing the ball to sail over his head, strike the far post, and rebound into the net.

Having been in complete control, Farnham were now forced to hang on for the final ten minutes, reverting to their bad old habits of hitting aimless balls into the channels, rather than aiming to play their way through the midfield as they had been doing.

Thankfully, although the final moments were unnecessarily tense, the Town were able to hold on for what was a well-deserved win and the team can now look forward to start next year in style with a home win against Sheerwater on Saturday 8th January.

In the meantime, everyone here at Farnham Town F.C. would like to wish you all a very Happy New Year!

The Town’s next home match is the Combined Counties league game against Sheerwater on Saturday 08 January.  Kick off 3:00pm 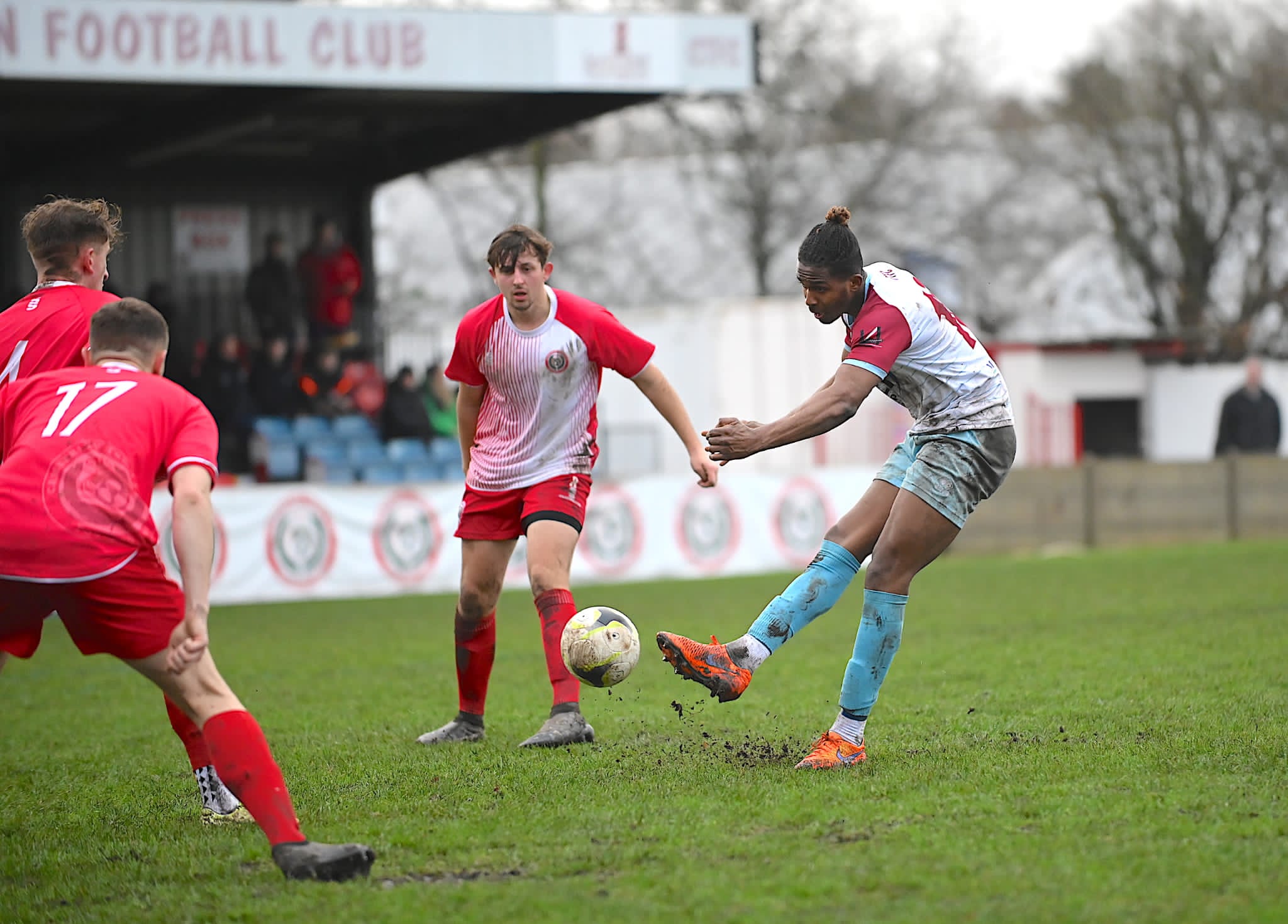