Farnham Fight To Come Away With Their Fourth Win

He should be celebrating another battling away day win, the Town’s third on the bounce.

He should be reflecting on a superb second half that saw Farnham come from behind to beat Molesey 3-1.

And he should be looking forward to the visit of Jersey Bulls with the confidence that comes from a long unbeaten run.

Instead, thanks to a moment of madness that saw central defender Kayode Conteh shown a straight red cad for approaching the Molesey dugout after the final whistle, Colin will be forced to shuffle his pack on Tuesday and will almost certainly weaken his side, whatever he chooses to do, against one of the league’s in-form teams.

And you may ask yourself, well, how did we get here?

A scrappy first half saw the more composed Molesey side belie their league position to enjoy the majority of play, almost being rewarded after nine minutes when Farnham ‘keeper Richard Ossai was forced to tip a dipping shot from outside the area over the bar.

In response, Farnham were forced to play on the break, with Josh Ogunseye and George Pilbeam looking to get behind the defence but a compressed midfield created little of note and it was of little surprise when Molesey took the lead on twenty-five minutes.

The goal, almost certainly deserved on the balance of play, came down Farnham’s left as Moseley’s wing back Jeff Twumasi skipped past the Town’s Tom Smith to deliver a cross that centre forward Antonio Officer simply couldn’t fail to nod home from close range.

But this was as good as it got for Molesey and Farnham gradually grew into the game.

Momentum was briefly lost when Farnham Town skipper Ashley Lloyd, a player opposition fans love to hate but would, in fact, love to have leading their team, was sent to the sin-bin for dissent on the stroke of half-time.  However, by then, the Farnham fans had seen enough to suggest that the Town were more than capable of mounting a comeback in the second half.

And so it proved, despite Molesey’s best attempts to preserve their lead by breaking up play with a series of niggly, tactical fouls and frequent interruptions for injuries and, somewhat unbelievably, a bout of cramp suffered by their goalkeeper.

All this was merely delaying the inevitable and Farnham finally equalised on 70 minutes with a mirror image goal to Molesey’s opener as Josh Ogunseye jinked his way into the penalty area and supplied a pin-point cross for George Pilbeam to head home.

Five minutes later Farnham were ahead with a superb solo goal from Josh Ogunseye who beat a somewhat slack Molesey offside trap, took advantage of the ‘keeper’s hesitation to go around him and, just as it appeared that he might have gone too wide, turned inside, went past a couple of defenders inside the six yard box and slotted home from close range.

As the Town sought to see out the game with a series of substitutions, they actually allowed Molesey to get back into it and were almost undone when a Molesey corner produced a spectacular save from Farnham ‘keeper Richard Ossai at his near post.

Matches are often decided by such fine margins, and so it proved when, deep into injury time, a Molesey clearance ricocheted back into the path of Josh Ogunseye who simply had to run through, round the ‘keeper, and pass the ball into an empty net.

Farnham Town manager Colin Millard was proud of the way in which his side got back into the game:

“In the first half we lacked the intensity and grit you need to succeed in any game.

At half time the better team were in front and deservedly so.

I needed to remind the team that you get nothing in life by just turning up and you have to earn the right to overcome any opponent.

We got the reaction we wanted second half and couldn’t I have been prouder of the response which wasn’t just about grit and hard work but those combined with incisive football – all of the things that we have been working on from day one of this season.

Every single game, every single week you have to earn the right to win.

You might think you can play the game in the mould of a Man City or the great Barcelona teams but you can’t.

You must out work teams. You must win the battle first before you can win the match.

That was demonstrated perfectly this afternoon. On to the next”.

The match was won, the whistle had blown and the Town players and management could celebrate a fourth consecutive league win.

Only to be knocked back by Kay’s moment of madness.  Truly two steps forward, one step back for a Town side that deserved better.

The Town’s next home match is the league game against Jersey Bulls on Tuesday 12 October.  Kick off 7:45pm 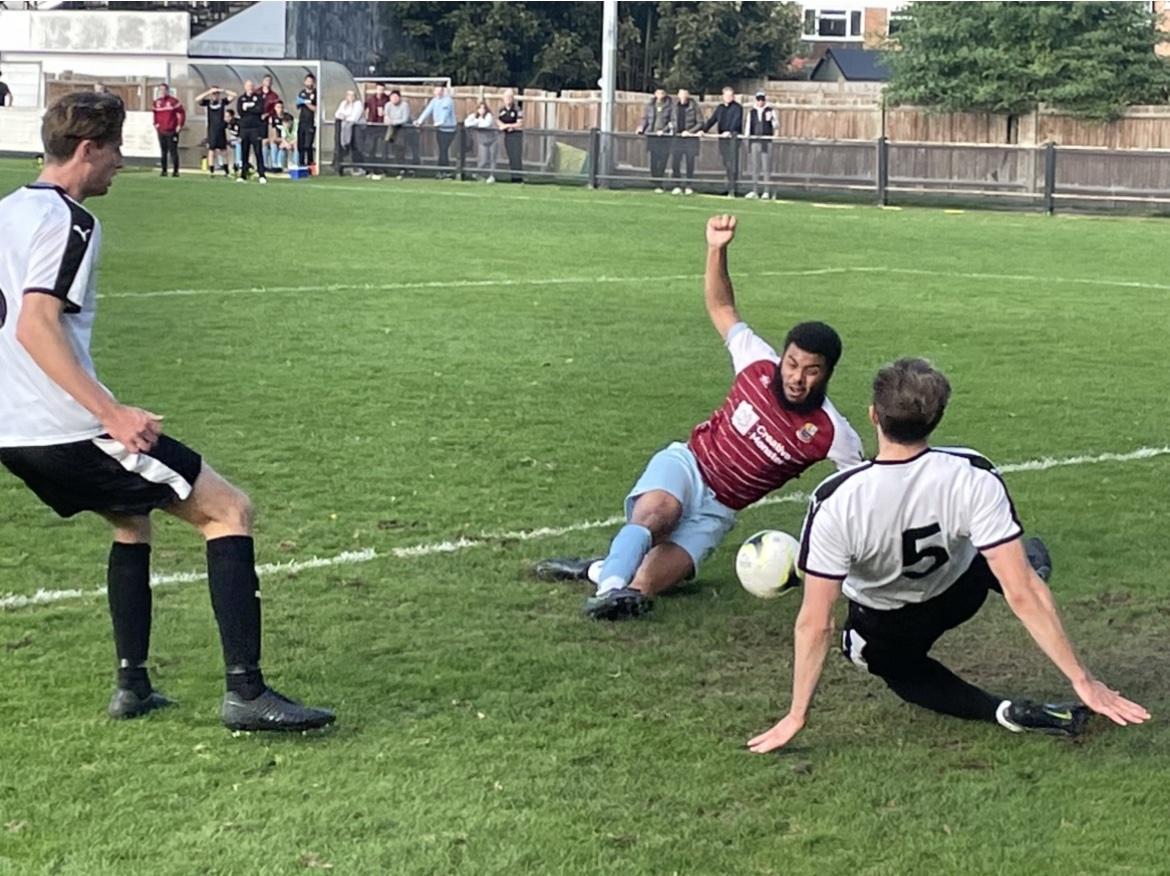