The Town collect another three points with a 3 – 2 win at high-flying Horley Town.

In the end, the score didn’t really reflect the dominance that the Town showed in quite possibly their best performance of the season.

They scored three goals and dominated possession for much of the match, yet found themselves only winning by a single goal due to a combination of unfortunate lapses in concentration and an unnecessary eagerness to become embroiled in confrontations.

The first goal came after just four minutes when the Horley Town ‘keeper misjudged a Matt Glass fee-kick and brought down Farnham skipper Ashley Lloyd in the six-yard box.  Up stepped Josh Ogunseye to send the ‘keeper the wrong way and give the Town the lead.

Horley’s response was to take a physical approach, breaking up play with petty fouls that all too often went unpunished by the referee.

If the idea was to get under the Town team’s skin, it worked a treat and, with Farnham losing both their shape and their concentration, Horley snatched an undeserved equaliser when a slick move resulted in a low cross being tucked away on the half an hour mark.

Having lost their way toward the end of the first half, Farnham started the second brightly and were rewarded for a sustained period of pressure by regaining the lead when George Pilbeam was on hand to head home a Dan Stewart cross after 53 minutes.

Ten minutes later, Josh Ogunseye had a chance to make the match safe after he was taken down in the penalty area.  Unfortunately, he put his penalty straight at the Horley Team ‘keeper who then saved bravely at the feet of George Pilbeam following up the rebound.

Farnham finally found their third on 89 minutes when a Tom Smith cross came back off the woodwork to the feet of Matt Glass who had the presence of mind to knock it back across the goal for Josh Ogunseye to grab his second goal of the game.

Even then, the action wasn’t over as, deep into added time, the Town allowed a long range Horley free-kick to sail straight into the net.

Farnham manager Colin Millard was pleased with the result, but concerned that the Town didn’t sew up the game sooner :

“I thought this was a thoroughly deserved victory with the only criticism I could level at the lads being that it wasn’t more comfortable than the scoreline suggests.  Apart from a 15 minute spell towards the end of the first half where we conceded the equaliser, we dominated this match and had we scored five or six no-one could have complained.

I suppose the two goals conceded were sloppy but you could over analyse absolutely everything.  Their equaliser was a well worked goal and their second was pretty much the last kick of the game, but we must stop giving teams chances against us.

This game, like many others so far this season, should have been dead and buried inside the opening half an hour but we were just not clinical enough in both boxes.

However, we have now played four of the current top five and we’re making quick and steady progress. On to the next!”

After three wins on the bounce, Farnham are looking in good shape to make further progress in the Buildbase F.A. Vase next Saturday.

The Town’s next home match is the F.A. Vase tie against Bashley on Saturday 25 September.  Kick off 3:00pm 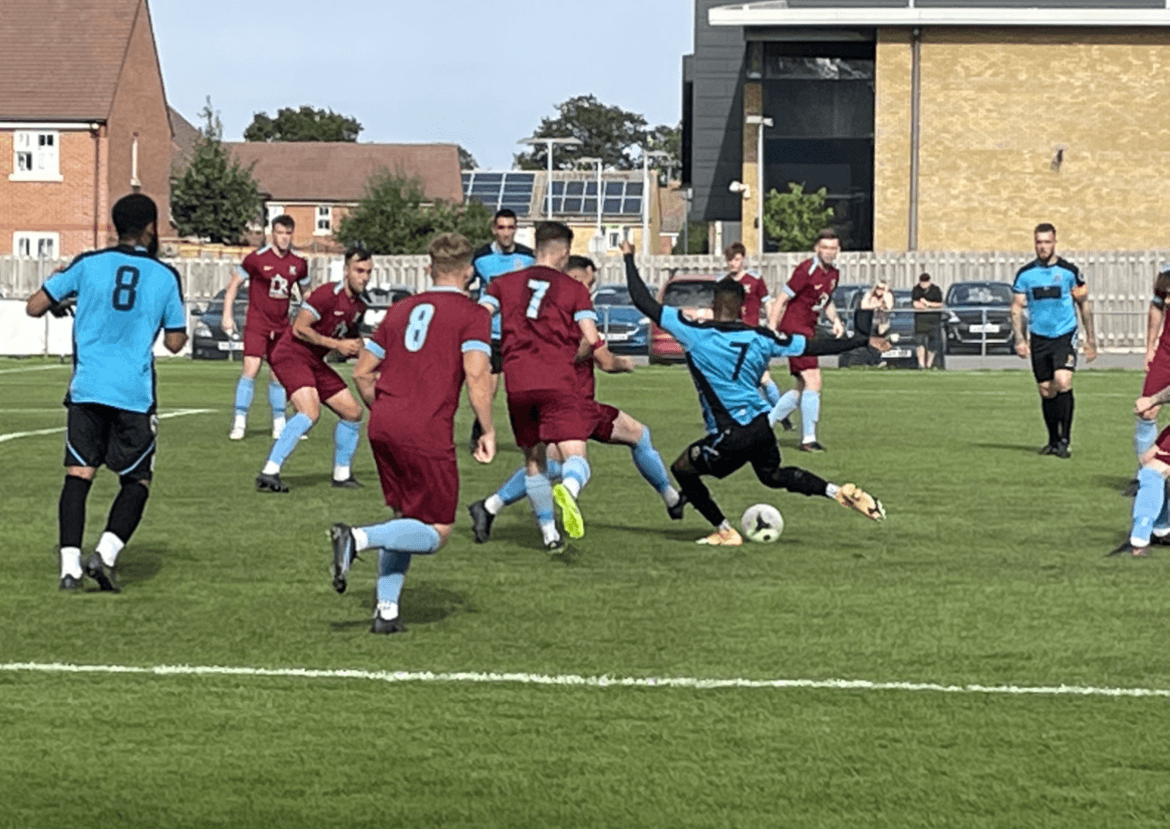