Farnham Usher In A New Era With A 3-1 Win Over Cobham.

Well, that was some week, wasn’t it?

One where it felt as though Manager of the Month wasn’t so much a competition as a job description!

With the ‘Reid Revolution’ now firmly consigned to history, the new management team of Roger Steer, Dan Goodall, Tristan Rees and Chris Adams were in the dugout for their first game in charge of Farnham Town.

Time will tell if this new management team will take the Town on its desired journey to Step 4 next season, but this performance, and result, was an excellent way to establish their credentials.

Of course, it helped that Cobham were desperately poor.

Someone described them as a ‘pub side’ and, if that’s the case, last orders had been called some time ago.

However, you can only beat what’s in front of you, and here the Town attacked their task with gusto, opening the scoring on four minutes when a Josh Ogunseye shot was deflected through the Cobham ‘keeper’s legs to give the new management team a dream start.

From then on, Farnham absolutely dominated the first half.

The team played with an energy and purpose that has been missing in recent games, impressing the home fans with slick passing and movement that evoked memories of the superb performances that came at the start of Tony Reid’s reign, away to Frimley Green, Fleet Town and Jersey Bulls.

All that appeared to be missing was an end product, but this would be supplied in some style in the 31st minute when Ben Bauchop lined up a shot from twenty yards out, took aim, and hit a strike into the top corner for what is quite possibly the Town’s Goal of the Season.

With Farnham now totally on top, they had a legitimate claim for a penalty turned away before Max Blackmore extended the lead on the stroke of half time, beating his man in the area before hammering the ball home past a stationary Cobham ‘keeper.

After such an excellent all around team performance it was somewhat unfortunate that the Town were forced to make changes at half time, having to replace full back Max Meaton and skipper Greg Haydon.

This undoubtably affected the team rhythm, although individuals continued to impress, particularly centre back Ange Djadja who looked assured and composed when making tackles and bringing the ball out of defence.

It was also fun to see Farnham Town Club Secretary, John Lowe, putting in a second half shift as a referee’s assistant, although flagging Josh for a marginal offside didn’t go down too well with the Farnham faithful!

There were chances to score more, with Max Blackmore and Cavin Atkinson both spurning good opportunities to find the net for Farnham’s fourth, however, as the game gradually came to its conclusion, it would be Cobham who would score, completely against the run of play, with Jacob De Sa picking up a consolation goal.

So, a comfortable start for the new management team.

They’re sure to face a tougher test when some familiar faces return to the Memorial Ground with Knaphill next Saturday, but, for now, they can enjoy the afterglow of a well deserved win.

The Town’s next home match is the Combined Counties league game against Knaphill on Saturday 16 April.  Kick off 3:00pm 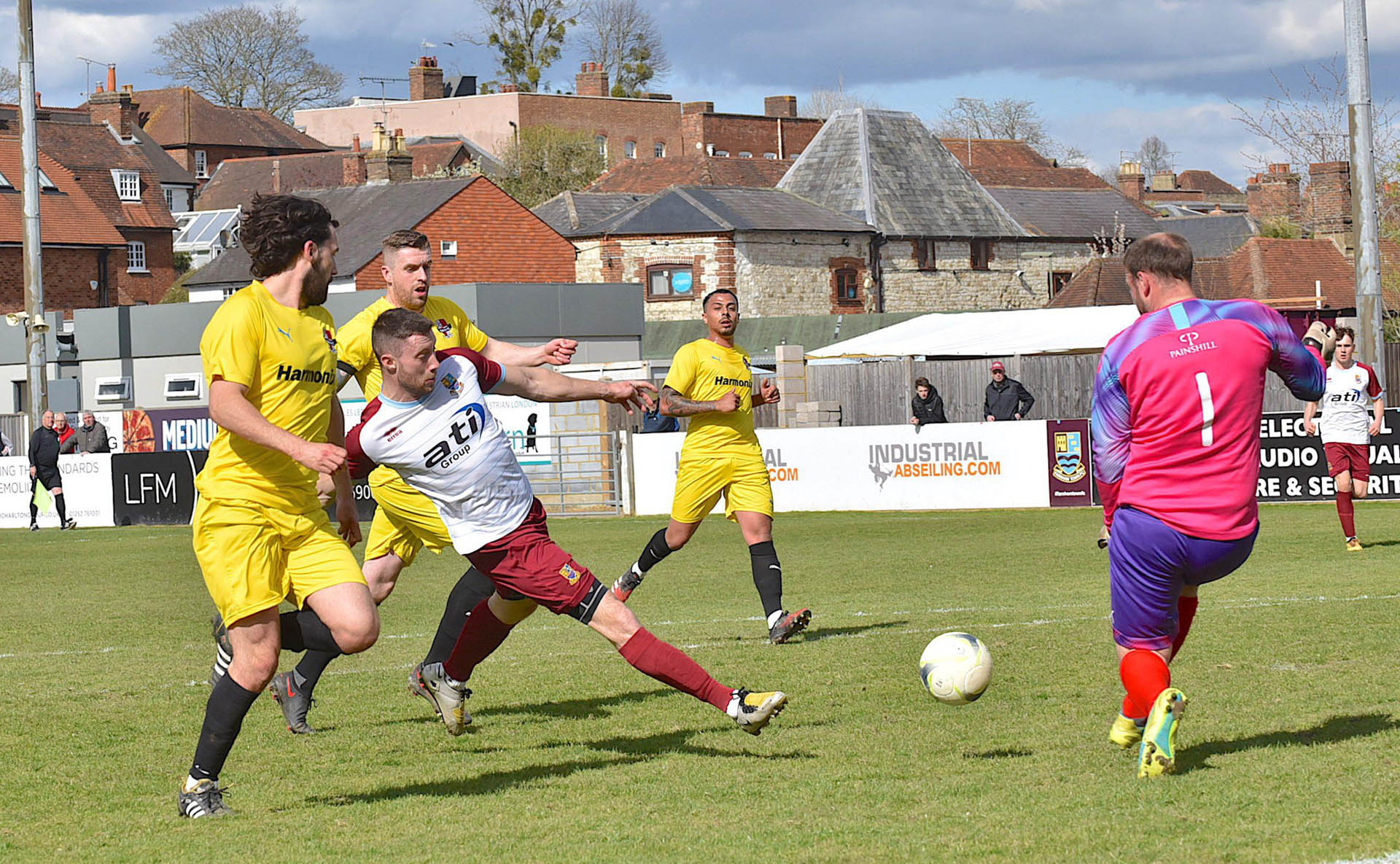