In the curtain raiser for the 2022/23 season, The Town battle back to earn a draw against well-fancied Jersey Bulls.

So, after the ‘phoney war’ of pre-season friendlies, this was the real thing.

And the reality is, that based on this performance, Farnham Town will be ‘there or thereabouts’ at the end of the season.

Reflecting the amazing work that The Town are doing off the pitch to promote the club, a massive crowd of over 600 supporters packed the Memorial Ground to see the season opener against the highly fancied Jersey Bulls.

And it was The Bulls that had the better of the opening exchanges, with their impressive midfield trio not only stifling The Town’s creativity but also constantly looking to get their forwards in behind a solid Farnham back four.

Despite being on the back foot, it was The Town that had the first clear cut chance on 11 minutes when Owen Dean was played in by a neat pass from Kane Fitzgerald, only to see his shot saved by the imposing Van Der Vliet in goal for The Bulls.

Just five minutes later, with The Town losing the ball in the middle of the pitch, it was Jersey’s turn to almost open the scoring, when a clever lob from distance saw Farnham ‘keeper James Ferguson relieved as the ball came back off the bar.

Although Farnham were disciplined in defence, it meant that the full backs were unwilling to push forward, unable to provide width and support to the Town’s attacks, which, in turn allowed Jersey to take control of the game with some neat passing and one touch football, constantly looking to hit the channels and set up their strikers to score.

And, on 23 minutes, that’s exactly what happened.

The Town lost the ball on the halfway line once more and were forced to backpedal as The Bulls broke down the right and delivered a neat cross that striker Sol Solomon was able to flick on and over James Ferguson into the Farnham goal. 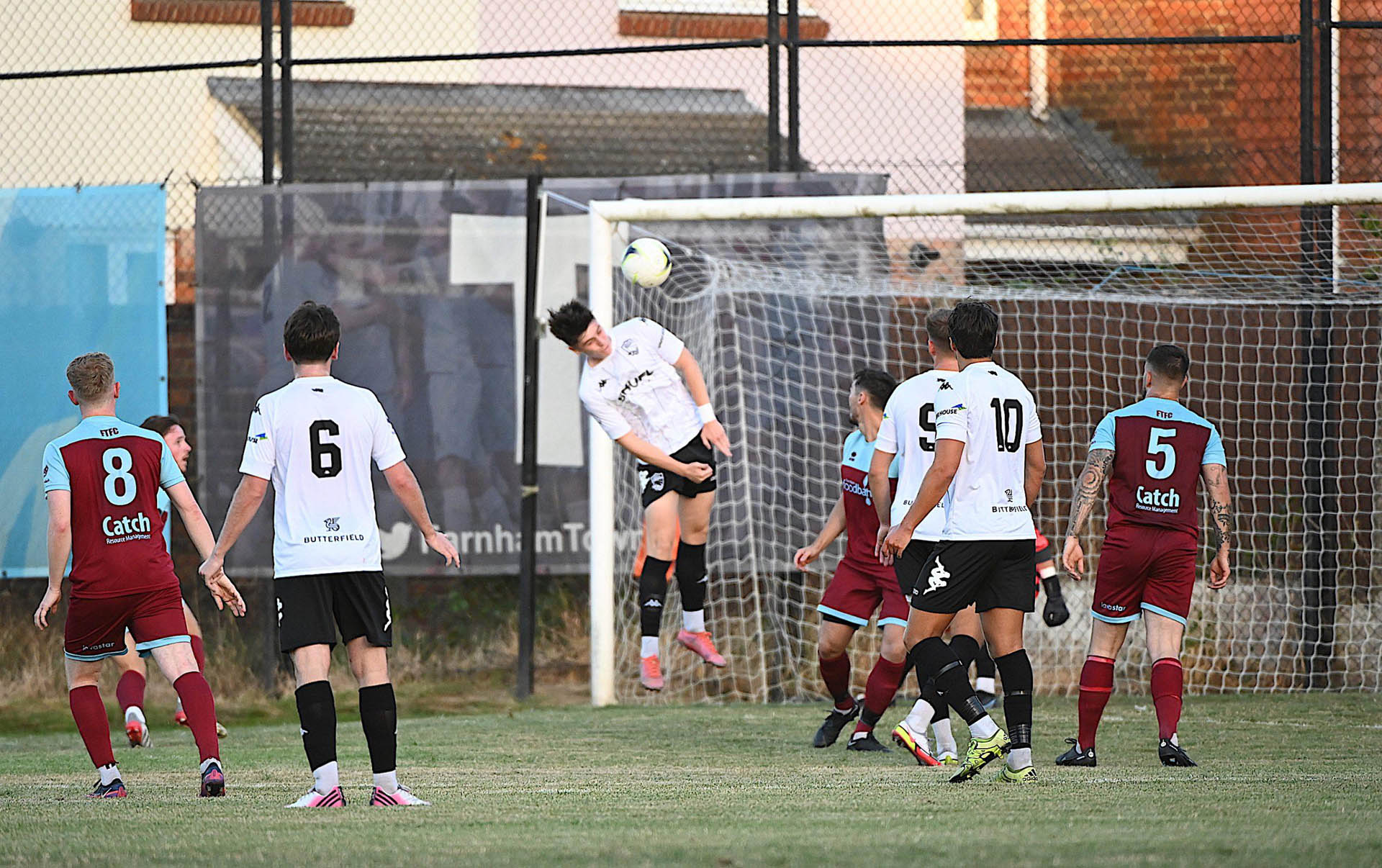 Having taken the lead, Jersey might have expected to have also taken control of the game.  However, although the visitors continued to look composed in the centre of the pitch, it was Farnham who finished the first half the stronger, carving out an excellent opportunity for Owen Dean on 36 minutes that Van Der Vliet again did well to parry, and, just two minutes later, seeing Kane Fitzgerald set up Jamie Hoppitt with a chance the striker put just past the post.

Into the second half and, although Jersey did create a couple of chances, it was The Town that began to take control of the game and were rewarded in the 57th minute when, having been awarded a slight fortuitous corner, the resulting passage of play saw full back James Batchelor send in a cross for Owen Dean to stab home at the far post.

Although Jersey might have felt aggrieved at the manner of the goal, it was certainly no more than Farnham deserved and, for the next 25 minutes, it was The Town that looked the more likely winners, with their best chance falling to substitute Connor Young who couldn’t quite react in time to a misplaced clearance from the Jersey ‘keeper.

As the match reached its conclusion, The Bulls pressed forward once more, with the final five minutes spent almost exclusively in and around the Farnham penalty area as Jersey searched in vain for a goal that would have seen them take all three points.

Thankfully The Town held on, and the reaction of both players and fans at the final whistle showed just how much the result meant. Over 600 fans come to watch the 22/23 season opener on Tuesday evening – a fantastic showing of support for the boys to kickoff their campaign.

What a way to start the new season! Thanks to everyone who came down to support the team ❤️#UpTheTown pic.twitter.com/1PfWHj7S1h

Time will tell whether each side will reflect on this as a point gained, or two points dropped as they aim for promotion.  What is not in question is the fact that, if they continue to play like this, both sides will be in the mix at the end of the season

The Town’s next home match is the Combined Counties league game against Cobham on Saturday 13 August.  Kick off 3:00pm.  See you there!