A Dominant Performance Sees The Town Score Their First Win Of The Season Against Cobham.

Two games in and Sean’s side is taking shape.

Square pegs in square holes, everything in its right place.

An exciting mix of experience and exuberance that proved far too strong for a Cobham side that, at times, were reduced to the role of spectators as the Town’s midfield trio of Swift, Fitzgerald and French passed around and through them at will.

On a scorching summer’s day, a crowd of over 250 only had one question:

How did we not score more than once?

It certainly wasn’t for the lack of quality chances created by a Farnham side that always seemed to have options available all over the pitch, and The Town would go close twice within the opening quarter of an hour.

First, when Matt Bunyan just failed to connect with an Owen Dean cross, and then, when the same player did connect with a Kane Fitzgerald corner only to see the ball strike the post with the Cobham ‘keeper completely beaten.

Extended highlights of our opening league win of the season yesterday afternoon as The Town continue their unbeaten start! 👇https://t.co/jWvv5I2uOZ

Farnham would finally break the deadlock on the half hour mark with, what was in truth, a slightly scruffy goal.

Having beaten his man down the right flank, Owen Dean pulled the ball back to Jamie Hoppitt, who saw his well struck shot come back off the bar before falling to Bunyan, whose own shot was blocked into the path of Jack French who finally slotted it home.

Ten minutes later it might have been two when full back James Batchelor, making a positive foray down the right, was found unmarked in the area by the impressive Fitzgerald, only to see his first shot blacked and his second sail over the bar.

The second half showed more of the same, with opportunities falling for the hard working Bunyan, who just failed to direct his header on target, Hoppitt, who struck the side netting and Dean, who couldn’t quite apply the final touch after good build up play from Fitzgerald and French. 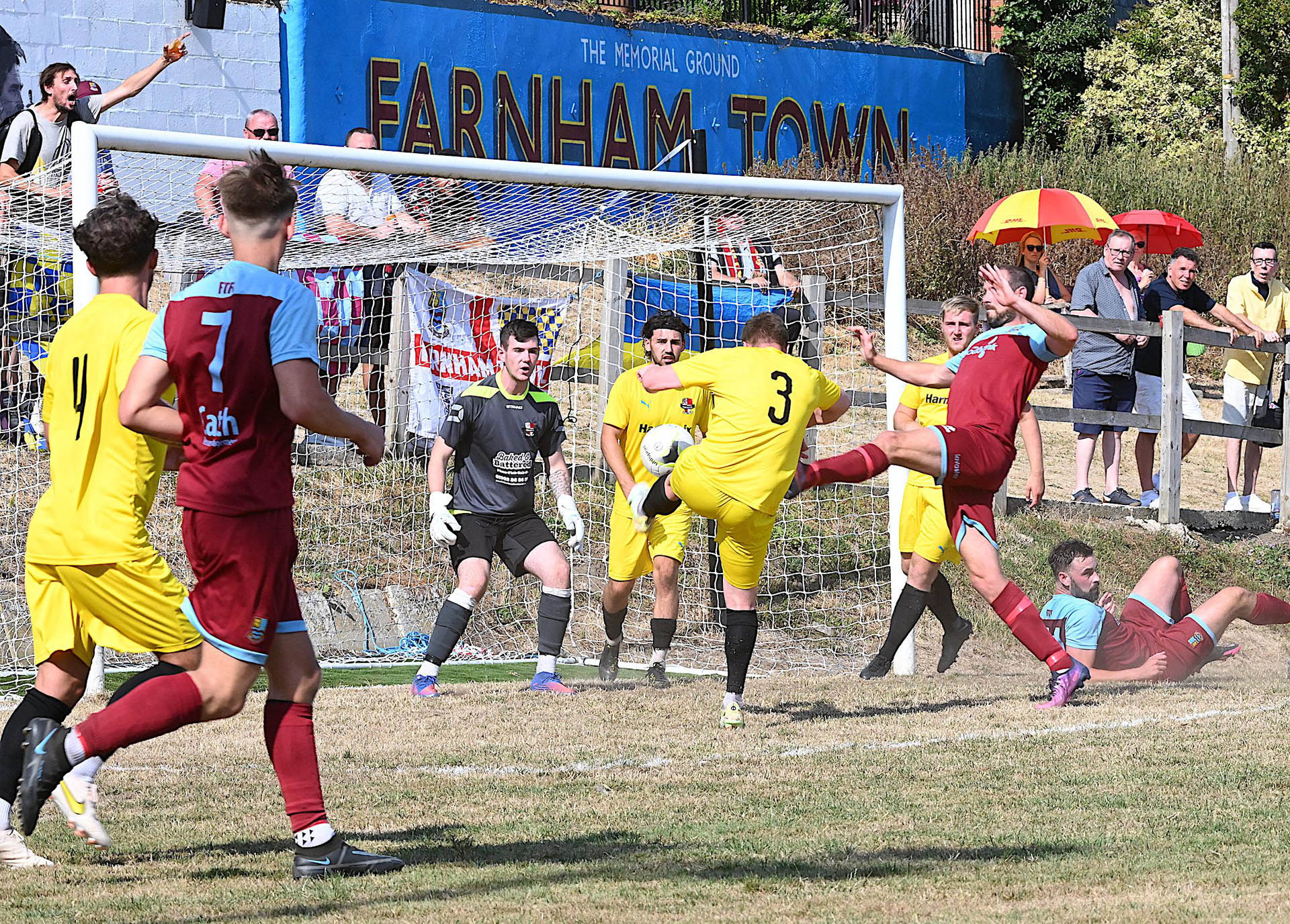 On 77 minutes Dean would be denied by a wonder save from Cobham ‘keeper Harvey Keogh that pushed the ball up and onto the bar and then, with two minutes remaining, The Town hit the woodwork again when substitute Danilo Pereira was played through only to see his thunderbolt shot cannon back off the base of the post.

In excruciatingly hot conditions, thanks to everyone that came to support The Town as we picked up our first league win of the season! 💪#UpTheTown pic.twitter.com/pGhKN37Q6W

Farnham now face two away fixtures in the space of a week.  At Tadley Calleva on Tuesday night and Frimley Green next Saturday.

They may need to be more clinical in front of goal, but they’ll certainly be confident after this performance.

The Town’s next home match is the Combined Counties league game against Camberley Town on Tuesday 23 August.  Kick off 7:45pm.  See you there! 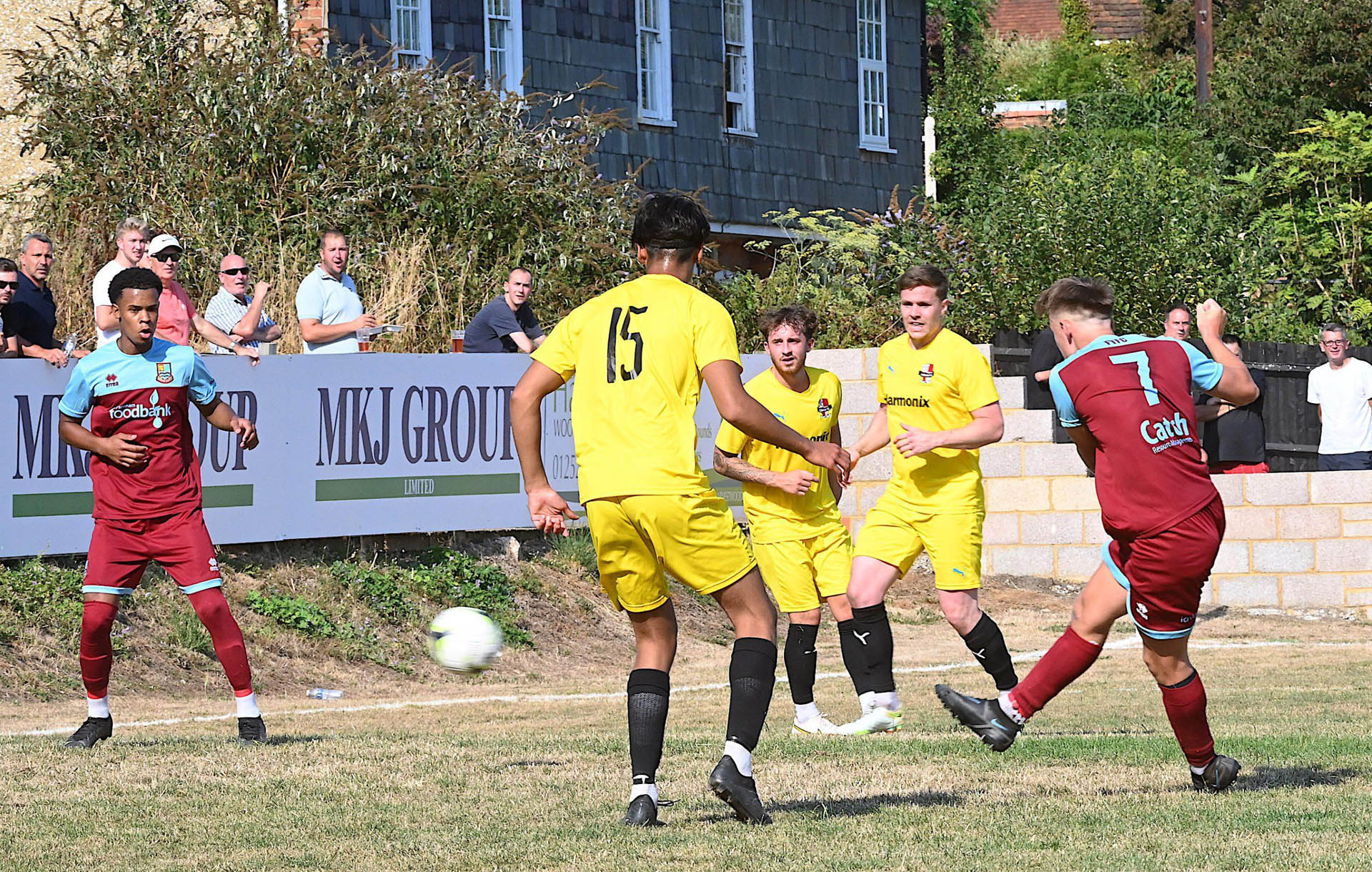