Don’t be fooled by the scoreline.

This match had all the makings of a tough test for the Town.

It was obvious that the Fleet Town management team had done their homework, identifying the strengths and weaknesses in the Farnham Town team and developing a combination of individual and team tactics to nullify the former and exploit the latter.

In particular, Ellis McLean was deployed to shackle Farnham’s, Kane Fitzgerald, and, for much of the first half, the tactic worked.

Unfortunately for McClean and his Fleet Town teammates, the first time that Fitzgerald was able to lose his man, he was also able to put in an inviting cross for Matt Bunyan to power home with his head to give Farnham the lead on 12 minutes.

For the next 15 minutes, it was pretty even, with a well drilled Fleet Town team looking to hit long diagonal balls to find space behind the Farnham full-backs, while Farnham aimed to impose themselves in midfield as they have for the past four games.

And then, on 28 minutes, came the first moment of madness.

A sustained period of pressure from Farnham finally saw the ball break to Owen Dean on the edge of the area.  He caught the ball perfectly and it seemed all set to hit the back of the net, only to strike Jamie Hoppitt on his head in the six yard box.

Nine times out of ten the ball would have been deflected away or over the bar, but this time fortune smiled on Farnham and the deflection not only changed the trajectory of the ball, but, in doing so, completely wrong footed the Fleet Town ‘keeper.

If Fleet felt that the gods were against them at that point, worse was to follow five minutes later.

A misplaced clearance from an over-engineered goal kick fell straight to the feet of the effervescent Owen Dean who took the ball into the area and shaped to shoot, only to be put off his stride by a strong challenge from behind.

It was one of those occasions where people say “I’ve seen them given” and, on this occasion, it was.

Worse still, the referee deemed it to be denying a goalscoring opportunity and the Fleet Town defender saw red.

The resulting penalty was confidently despatched by a quality strike from Fitzgerald and the Town were now cruising at 3-0.

Except, to their immense credit, Fleet Town refused to fold, and almost got back into the game, when a well-struck free-kick hit the bar.

Into the second half, and, for the first 15 minutes, Farnham were firmly on the front foot and were deservedly rewarded by two high quality headed goals; the first from Matt Bunyan on 56 minutes, the second from Owen Dean on 62 minutes, each arising from a wonderful whipped in cross from Tom Smith from the left flank. 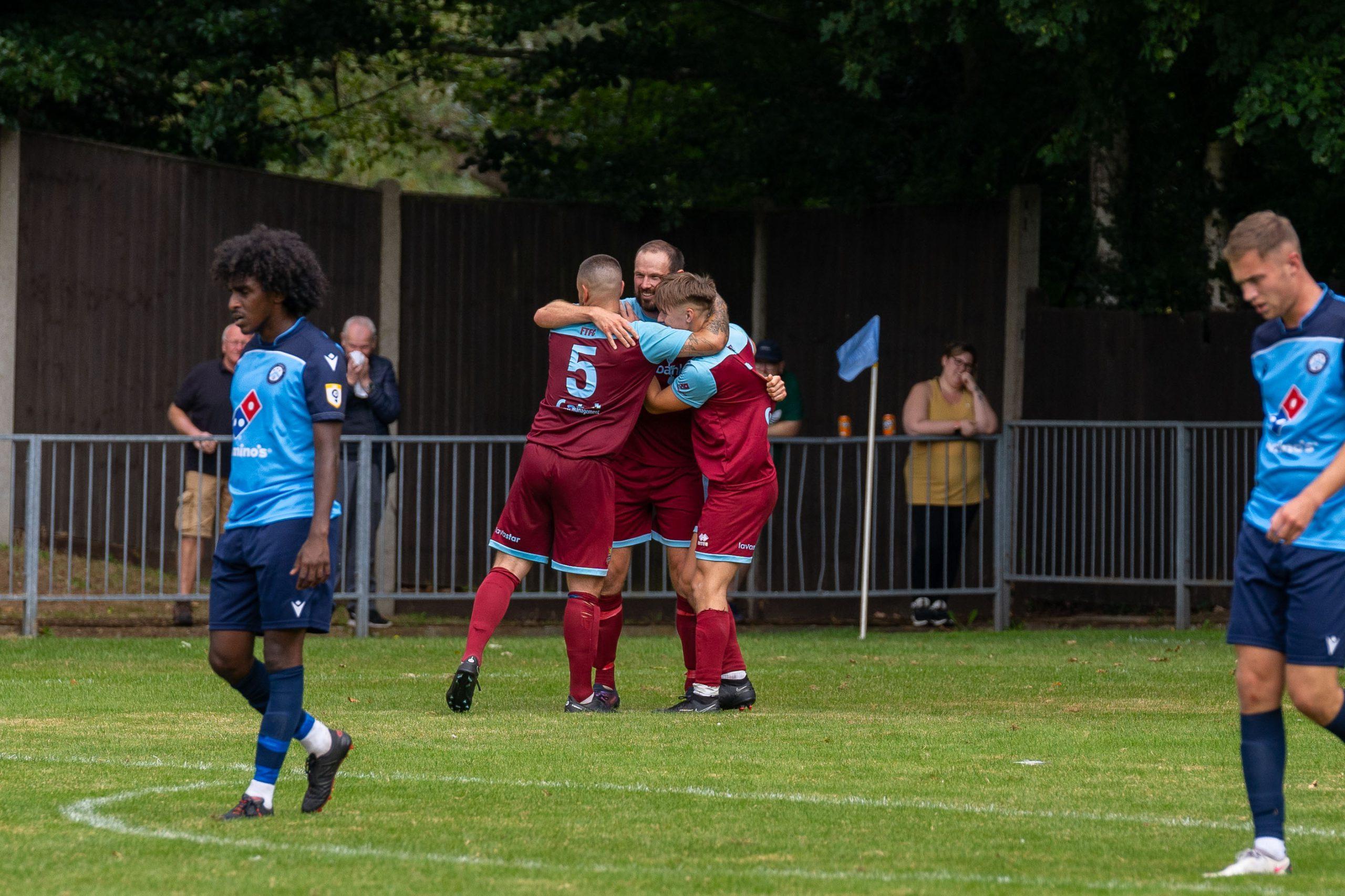 Five goals to the good and up against ten men, it was no surprise that Farnham Town manager Sean Birchnall chose to ring the changes in order to give some players a well-deserved rest and others much needed game time.

Unsurprisingly the substitutions disrupted the rhythm of the game.  However both Cassius Dunstan and Marcus Cousins caught the eye, the former composed in centre midfield, the latter a constant threat in and around the Fleet Town penalty area.

On the basis of a brilliant Bank Holiday weekend, the Farnham Town players can be rightly confident as they head to Colliers Wood United for what is an early season top-of-the-table clash next Saturday.

The Town’s next home match is the Cherry Red Records Premier Challenge Cup against Flackwell Heath on Tuesday 06 September.  Kick off 7:45pm