Up until the 79th minute, a match lit up by moments of sublime skill, yet also littered with awful errors, could have gone either way.

Having failed to pick up a point since August, Sean Birchnall chose to ring the changes for a local derby against a Guildford City side also out of form, introducing two new signings in Chris Ellis at centre back and Will Hellestoe on the right flank, completely revamping the back four, and utilising Kane Fitzgerald in a deeper role with Owen Dean playing behind the front three.

This new look Farnham Town undoubtably enjoyed the better of the opening exchanges, but their good start would be undone when the defence missed three chances to deal with what was a fairly routine cross before the ball was finally tucked home.

Determined to fight back, the Town surprised their opponents when Chris Ellis, who had already demonstrated his spectacular long throw, chose instead to play the ball short to fellow debutant Hellestoe. A neat return ball to the overlapping Ellis then saw the centre back ideally placed to slide an inviting cross for Rob Carr to slot home at the far post.

Now Farnham were firmly in charge.

After 25 minutes, Seb Karczewski’s towering header from a well worked free kick from Kane Fitzgerald was turned over the bar and the resulting corner, again swung in by the hard working Fitzgerald, saw the Town go close once more.

It seemed inevitable that Farnham would take the lead and so it proved on 40 minutes when a long ball from Matt Ellis was brilliantly volleyed across the goal by Rob Carr, straight into the stride of Karczewski to drive home for his third goal of the season. 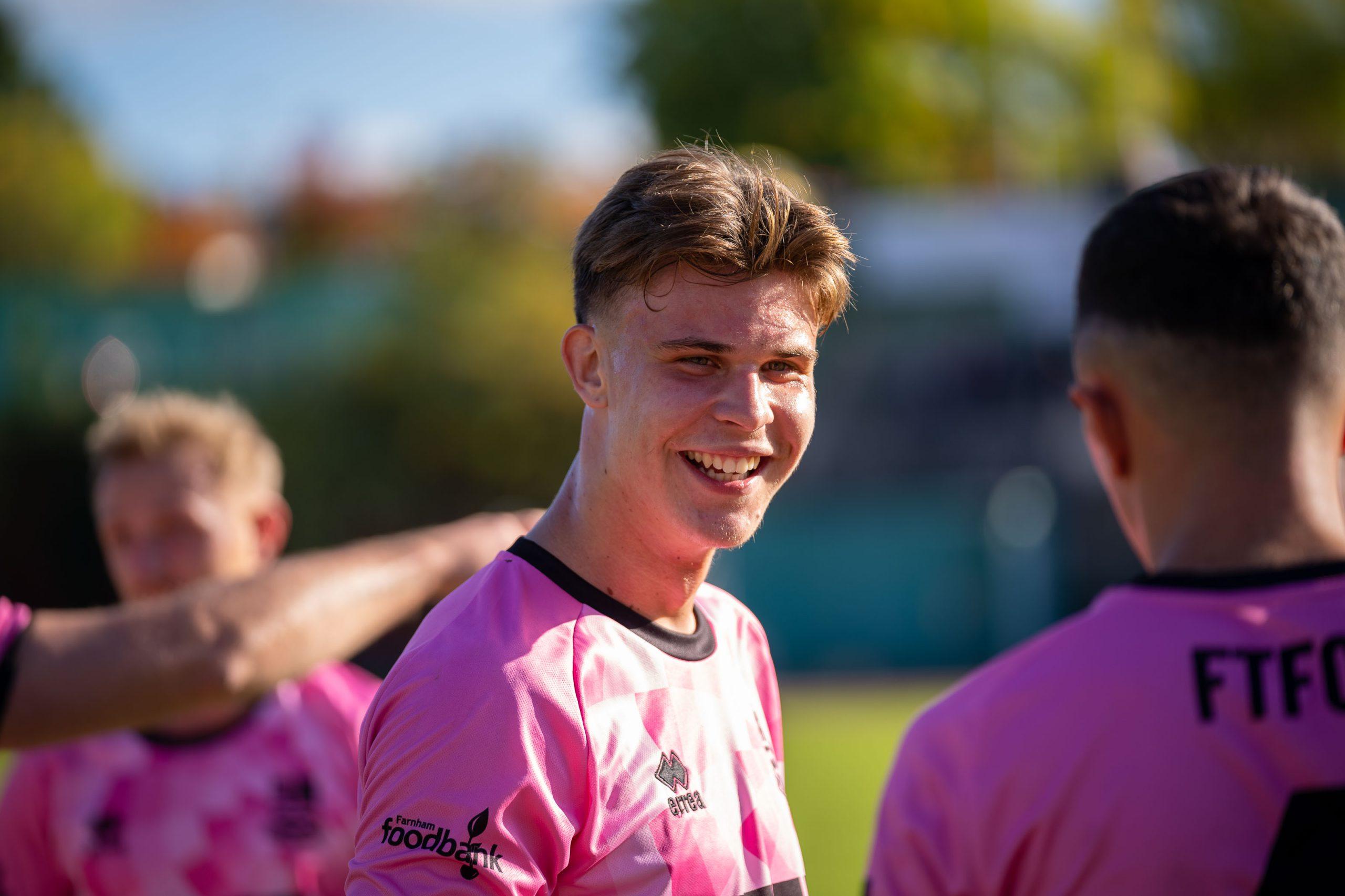 Unfortunately, the lead would last less than a minute.

In a similar fashion to their opening goal, Guildford worked the ball down the left, resulting in a drilled cross tapped in from six yards.

It meant that Farnham had now failed to hold onto a lead in four of the last five matches.

Would history be repeated with a fifth consecutive defeat?

Five minutes into the second half, the tie swung back Farnham’s way when an error in the Guildford defence allowed Kane Fitzgerald’s pass to find Will Hellestoe in space on the right and the debutant produced a composed finish to restore Farnham’s lead.

Now all they needed to do was hold onto it!

In fact, they might have extended it with additional efforts from Karczewski and Owen Dean before the ‘hearts in mouth’ moment in the 79th minute when Guildford produced a long throw of their own which was headed on and volleyed against the underside of the bar.

If it had gone in, Guildford might well have gone on to win the game.

Instead, with luck on their side, the Town would go on to add three more in the final five minutes.

The first, a delightful chip from Connor Young after his initial shot was saved; the second, another smart finish from Young played in by James Batchelor; and the third drilled home by substitute Tom Smith, clearly enjoying playing in a more advanced position.

So, six of the best, and, more importantly three big points for Farnham before they travel to AFC Croydon Athletic next Saturday.

The Town’s next home match is the Combined Counties Premier Division South league game against Sheerwater on Saturday 22 October. Kick off 3:00pm 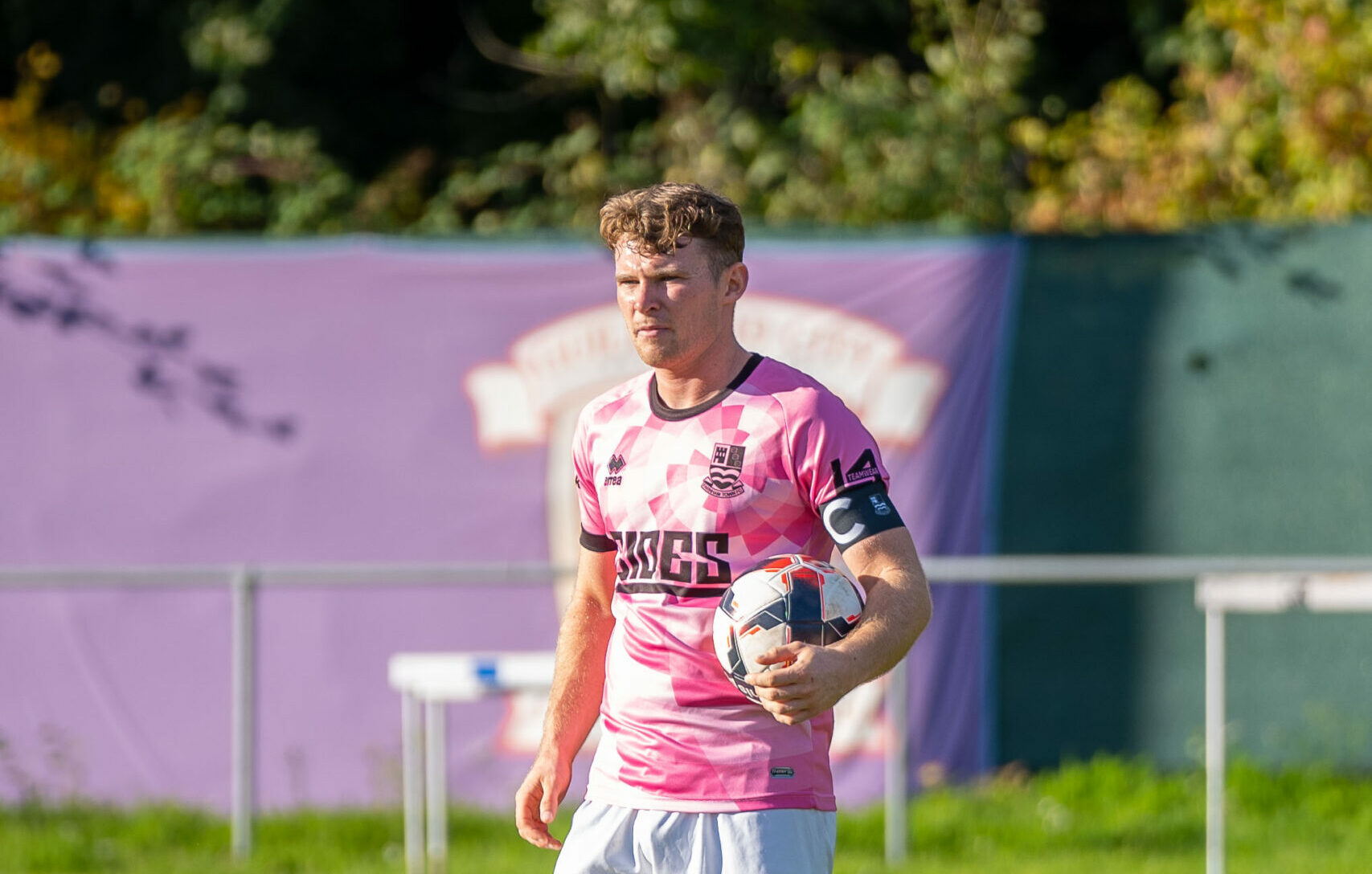