This was always going to be a tough test for the Town.

Top of the table Walton & Hersham came looking for three points to keep them clear of their rivals and turned in a performance that set the standard that Farnham will need to achieve if they’re to be in the mix next season.

From the first minute, the Swans took the game to the Town, looking comfortable in possession and always seeking to beat Farnham’s high press with clever passes that exploited the pace of their forwards.

Ironically, having withstood significant pressure without conceding a goal in the first twenty-five minutes, the Town were enjoying their best period of the game when Walton & Hersham opened the scoring.

As a Farnham attack broke down, the Swans broke at pace, overrunning the Town defence before Jordan Adeyemi played in Eddie Simon to beat Farnham ‘keeper Richard Ossai with a shot into the bottom corner.

The Town defence would again be undone by pace in the 35th minute.

A neat ball over the top from Joe Pratley-Jones sent Dean Rule free and, although there was an element of good fortune in the way he slightly scuffed his shot, it was a deserved second goal.for the impressive Swans.

And then, right on the stroke of half time, the Town created an excellent chance of their own when Arsen Ujkaj played in Josh Ogunseys one on one with ‘keeper Liam Allen, only to see the shot saved at the near post.

Farnham start the second half brightly, and were growing in confidence when they conceded a soft goal.

On 67 minutes, Walton & Hersham switched the ball to the left where the impressive Rule brought it down, beat his man and played it across the Town area for Jordan Adeyemi to turn in with an audacious back heel.

Five minutes later, it might have been 4-0 when the Swans were awarded a stonewall penalty

Thankfully Town ‘keeper Ossai continued his fine run of form with a smart save low down to his right.

Farnham would create one final chance for a consolation goal, when Josh Ogunseys was put through again in the 76th minute, but his desire to get the ball onto his left foot gave the ‘keeper time to make a good save.

On the basis of this performance, Walton & Hersham are deservedly in pole position for promotion, with a well-organised, skilful, side that played to their strengths in exploiting their opponent’s weaknesses.

No doubt the Town’s management will have been making notes for their own promotion push next season.

The Town now face their third home game in eight days when they take on Frimley Green this Saturday.

Don’t forget that you can GET IN! FREE if you spend £10 in The Queen’s Head before Saturday’s kick off!

The Town’s next home match is the Combined Counties league game against Frimley Green on Saturday 26 March.  Kick off 3:00pm 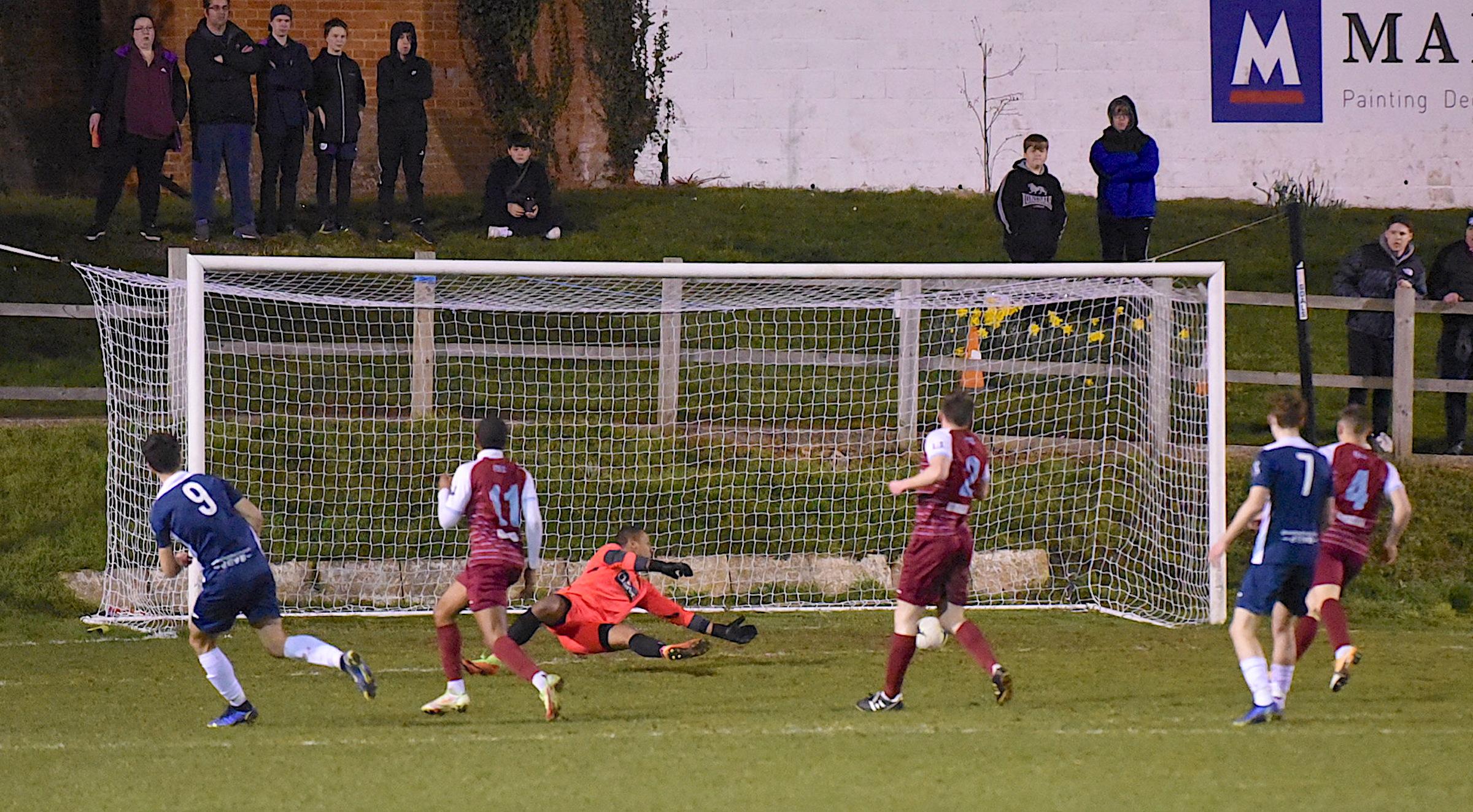