The Town Go Down To A Better Balham

Farnham Lose 3-0 At Balham On A Day When Nothing Went Right.

Have you ever had ‘one of those days’?

One where you looked back and felt that it really wasn’t worth getting up?

That’s how the Town team must have felt on Saturday.

First of all, the rearranged nature of the fixture meant that in form striker Max Blackmore was unavailable.

Then, as the teams lined up to come out, it became apparent that Farnham had brought the wrong kit and that there was a colour clash with both teams wearing white.  What followed was 15 minutes of utter farce as the Town tried to find a replacement option, thankfully resolved when the hosts provided a yellow shirt kit from Croydon Athletic, with whom they share a ground.

If you’re confused, then spare a thought for the players!

Certainly, Farnham didn’t seem themselves in a disjointed first half where nothing seemed to work.

This was summed up in the 28th minute when Arsen Ujkay was sin-binned for foul and abusive language, and, with the Town down to ten men for ten minutes, Balham began to take control of the game, with centre forward James Adebamo a constant threat to the Town defence.

Reflecting their growing superiority, and, perhaps, the fact that the Town were jaded after their efforts against Jersey last week, the hosts could have taken the lead twice in a manic minute around the half-hour mark.

On both occasions it was Farnham ‘keeper Richard Ossai who kept the Town in the game; first, by tipping a well struck shot over the bar, then by clawing the ball clear from the resulting inswinging corner, a weapon that Balham deployed to great effect throughout the game.

It seemed certain that Balham would score before half time, however they would be foiled once again by the excellent Ossai, this time saving teammate Harry Carter’s blushes by turning his deflected header over the bar to prevent an own goal in the last action of the first half.

Unfortunately, things would go from bad to worse for the Town in the second half.

Around the hour mark, Ben Bauchop was shown a straight red for a reckless challenge.

Whilst not malicious, it was out of control, and he could have no complaints about the referees’ response.

At this point Balham really took control and were rewarded with three almost identical goals in a ten minute spell from the 72nd minute, when the Town’s defence were torn apart time and again, not least by an inspired display from Balham substitute Cameron Gordon who looked a terrific player at this level.

So, a setback for the Reid Revolution.

But one that the team will learn from, and put behind them, as they face up to four games in the next fortnight.

The Town’s next home match is the Cherry Red Premier Cup game against Rayners Lane on Tuesday 01 February.  Kick off 7:45pm 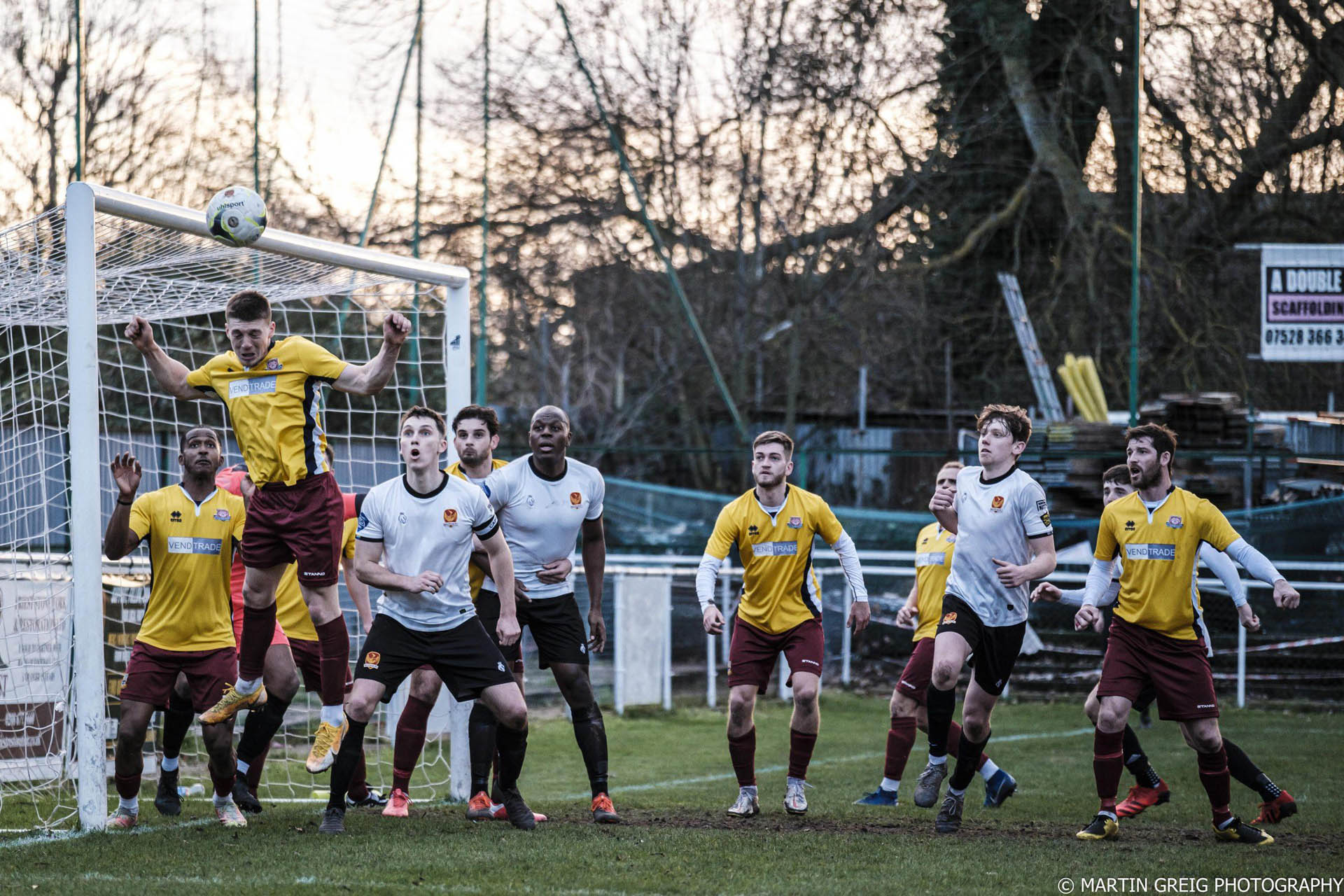