Nothing goes the Town’s way as they’re beaten 3-2 away at Sheerwater.

All too often, matches are decided by fine margins.

On another day, the Town might have come away with a point, if not, indeed, all three.

But this wasn’t that day.

This was a day in which not one, not two, not three, but four wrong decisions went against them.

To err is human, but it’s hard to forgive this horrorshow by the match officials.

The ‘writing was on the wall’ after two minutes when a Sheerwater attack came to nothing and the ball went behind for a goal kick.

However, as it did so, it struck the wheel used to move the goal around the artificial pitch and bounced back into play.  The officials missed the incident, allowed play to continue and, in the confusion, Farnham were grateful to put the ball behind for a corner.

A bad decision, made worse by what followed.

The inswinging corner evaded everyone and, completely misjudged by Town ‘keeper Richard Ossai, drifted straight into the net.

To their credit, the Town refused to let their heads drop, and were rewarded almost immediately when a neat move down the left saw Josh Ogunseye play a clever ball across to Max Meaton who fired home first time to bring the scores level after seven minutes.

The Town were now on top, and it was no surprise when, after 27 minutes, Josh turned provider again, this time setting up Kye Nash whose neat turn in the area gave him time to pick his spot and score his debut first team goal to give Farnham a 2-1 lead.

At this point, Farnham were in complete control and, as the referee blew for half time, it seemed that there could only be one winner.

Which made what happened in the second half all the more bizarre.

Quite simply, the Town didn’t turn up.

Well, obviously the players took to the pitch, but the team had lost its shape, with the midfield retreating back into the Town’s final third, leaving the forwards isolated and unable to hold the ball up for long enough to ease the pressure on the Farnham goal.

An equalizer was always coming, but how it came was a ‘head in hands’ moment for all concerned.

This time it was a long throw that evaded everyone until it fell to the unfortunate Ashley Lloyd who turned it into his own net.

With half an hour to go it was once more obvious that only one side was going to win, but this time, it wasn’t the Town.

What happened next set the tone for the final thirty minutes when a simple substitution saw Max Meaton ‘replaced’ by Harvey Mitchel.

Oh, if only it was that simple!

Max was already shirtless in the dugout when it became clear that the linesman was not allowing Harvey onto the pitch (apparently, he objected to the fact that Farnham hadn’t used the electronic board to announce the substitution). Aware that Farnham were having to defend with only ten men, Max put his shirt back on and ran back onto the pitch, an action that Sheerwater rightly objected to.  Thankfully, this farcical situation was finally resolved by the referee halting play and allowing the original substitution to be made.

And, if the linesman’s credibility was lost by this incident, it was about to be shredded by what happened in the 88th minute

With Sheerwater seeking a winning goal, they fashioned a one on one chance that ‘keeper Ossai did well to save and turn round the post.  However, the fact that the ball went over the line wasn’t seen by the linesman, and, as it span back into play, it was the Sheerwater striker that reacted first, turning it across the goal for his colleague to tap in.

It was a shocking miss by the match official.  Yet there was still time for an even worse one!

With Sheerwater now doing nothing other than defending their lead in injury time, Will May was bought down by a rash challenge by the Sheerwater ‘keeper.  It was clear that contact was made (and the ‘keeper admitted as much after the game) but the referee ruled that Will had dived, refused to give a penalty, and, to add insult to injury, booked Will for simulation.

Town manager Colin Millard refused to put the blame purely on the performance of the match officials.

“Well, I think that I said after Tuesday’s win against Horley Town that “we’ve been here before”.

I thought that we were the better team in the first half and deservedly lead at half-time.

But, second half, we didn’t show up for 30 minutes or so.

I don’t think that we deserved to lose, but that’s the fine margins we are currently falling the wrong side of.

The manner of the goals that we are conceding is a concern. Some of it is ‘park’ level.

We’d probably have got away with it last season at the lower level, but not now, and the players have to accept that.

Individually, some of their performances have been nowhere near good enough.

I know that there is a lot of talk of our injury list and how bad the officials were today, but I can’t control any of that.

Ultimately, had the team on the pitch produced a consistent performance today, we’d be talking about a win.

Because we’re not has nothing to do with injuries or the officials.

It’s to do with ourselves and our inability to consistently perform at a level which earns us three points.

We need to stop making excuses and look at ourselves”.

Denied a point by a series of contentious decisions, the Town must pick themselves up before they travel to Knaphill next Saturday.

The Town’s next home match is the Combined Counties league game against Redhill on Saturday 13 November.  Kick off 3:00pm 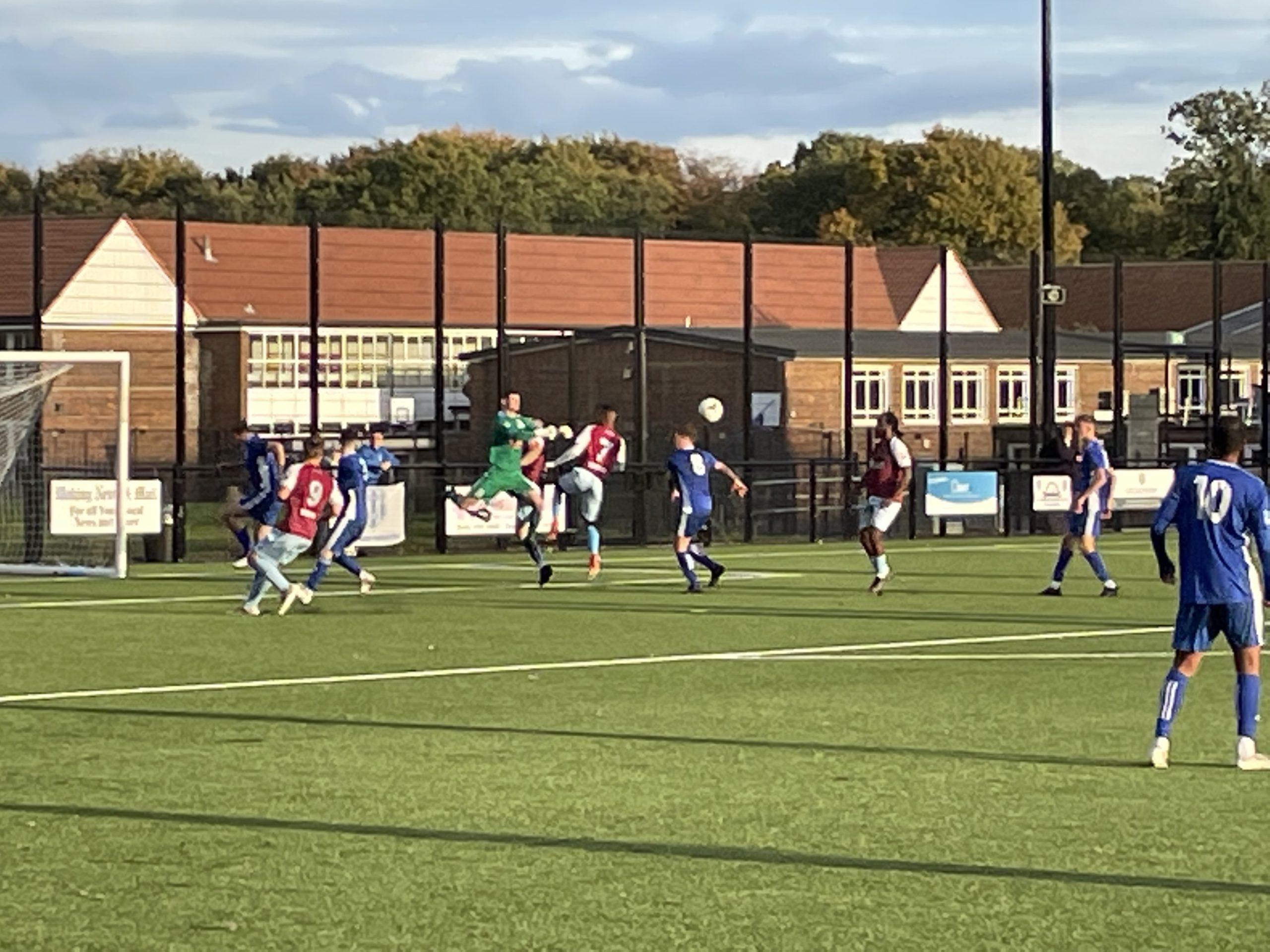