Another Shoot-Out & The Town Go Out

It’s Yet More Heartbreak As Farnham Go Out On Penalties Again.

Back at Italia 90, after Chris Waddle had skied his penalty, Gary Lineker famously observed that “Football is a simple game. Twenty-two men chase a ball for 90 minutes and, at the end, the Germans always win”.

For Farnham fans, it’s a similar feeling when it comes to cup-ties.

Twenty-two men chase a ball for 90 minutes, maybe more, but, in the end, the Town go out on penalties.

This was a match that almost defied description.

For the first 30 minutes, the Town were totally on top, with the pace of Josh Ogunseye causing carnage down the right flank of a Hartley Wintney side that looked anything but two divisions above them, and, if Josh had picked up another hat-trick, it would have been no more than the team deserved.

Unfortunately, Farnham were limited to a single goal after 12 minutes, when a delightful, curling, cross-field ball from Arsen Ujkaj released Josh for a clear run on goal.  With the full back trailing in his wake, Josh waited for the Hartley Wintney ‘keeper to commit himself before placing a composed finish into the bottom corner.

The next fifteen minutes saw the Town have the chances to ‘put the tie to bed’.

With the Hartley Wintney defence ‘at sixes and sevens’, Josh saw one shot hit the bar and another chance slide just wide; while Max Blackmore had a strong effort deflected of a defender’s back and over the bar.

And then, just as it seemed inevitable that Farnham would double their lead, they were pegged back when a left wing cross was missed by the Town defence, leaving Harry Cooksley to slot home the equaliser.

Now the game was end to end.

On 35 minutes, Max Blackmore must have felt he’d put Farnham back in front, only to see his powerful drive superbly saved by Lewis Hoy.  Then, five minutes later, it was Farnham ‘keeper Richard Ossai’s turn to impress, saving a smart shot from Toby Raggett.

With half time looming, the game changed once again.

That man Josh Ogunseye raced down the right once more, before putting in a perfect cross which Owen Dean met powerfully at the far post, sending his header back across goal and into the top corner.

The second half was a mirror image of the first, with Hartley Wintney dominating the early exchanges.

Their play deserved their equaliser on 61 minutes, but the Farnham defence would have been unhappy that they missed a series of opportunities to clear the ball before it finally fell to Adam Allen to prod home.

At setback, but one the Town took in their stride.

Just two minutes after losing the lead, Farnham took the chance to put themselves back in front when, once again, Josh turned provider, pulling the ball back for Karle Carder-Andrews to make it 3-2.

After that, the next 15 minutes was almost all Hartley Wintney, and it was no surprise when, after Farnham failed to clear once again, The Row scored their second equaliser, with Aaron Goode finding his fellow centre back Harry Taylor with a neat pull back, that Taylor couldn’t fail to turn in.

With neither side wanting extra time, the final quarter of an hour saw chances at either end, with some terrific saves from both ‘keepers and the Town grateful for the referee’s assistant’s flag when it seemed as though Hartley Wintney had stolen the tie in the 90th minute.

After a little confusion as to whether extra time actually was required, the match restarted with Hartley Wintney again in the ascendancy and they should have settled the tie in the first period, only to find Farnham ‘keeper Ossai in inspired form, making at least three fantastic saves.

The second period proved less exciting and simply served as a 15 minute break before the match reached its seemingly inevitable conclusion when, for the fifth time in the last three seasons, the Town went out of a cup competition on penalties, a difficult outcome to swallow, given their performance, especially in the first half.

A pulsating tie and one the Town will look to build on when they travel to Raynes Park Vale on Saturday.

Huge thanks to our matchday sponsor Silent Transport of Bordon.

We hope you enjoyed the evening and look forward to seeing you again soon.

The Town’s next home match is the Combined Counties league game against Horley Town on Saturday 05 March. Kick off 3:00pm 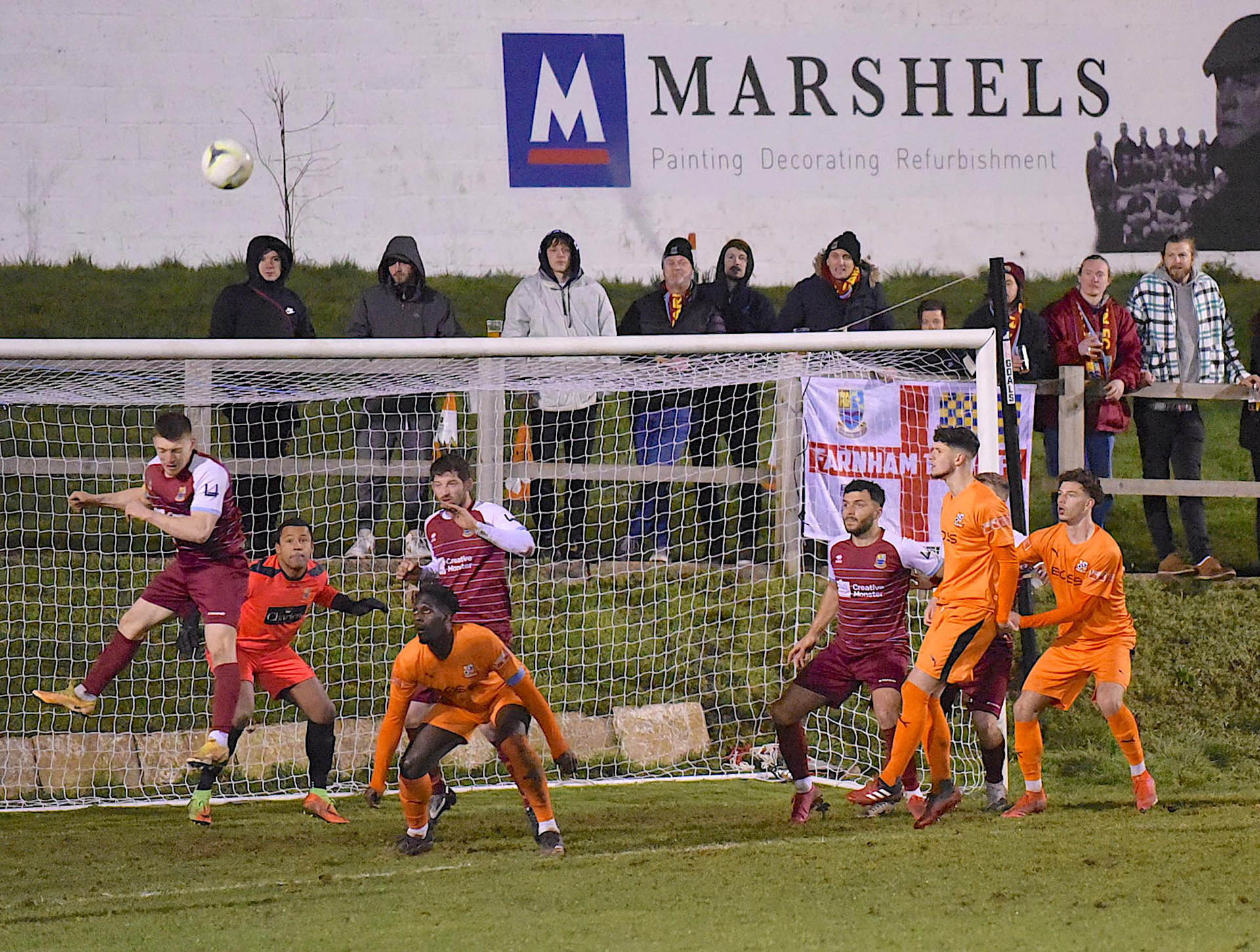