Sudden death penalty shoot out sees the Town crash out of the Buildbase F.A. Vase.

So, here is the question that everyone who saw this match is asking themselves.

How on earth did Farnham Town lose this Buildbase F.A. Vase tie to Bashley Town?

One nil up and cruising inside the first fifteen minutes.

Only to relax, sit back, and allow Bashley to score an undeserved equalizer.

A man up for the entire second half.

Only to fail to create a single chance of note throughout a turgid forty five minutes.

And all this after a hat-trick of impressive wins.

The truth is that the previous three wins have been on the back of the Town team playing to their strengths.

A strong start, a disciplined defence that allows the opposition few chances and a combative midfield that works hard to win the ball.

Unfortunately, this match exposed the weaknesses that have been equally evident.

A propensity to switch off and concede possession around the half hour mark in each half, a tendency to play too narrow if the full backs can’t push on, a midfield that is built on combativeness rather than creativity and the lack of a natural goalscorer up front.

Once again Farnham Town ‘came flying out of the traps’ and might have been three goals up inside the first twenty five minutes.

They actually took the lead after twelve minutes when, mirroring the events of last week, Josh Ogunseye converted a penalty after a foul on Town skipper Ashley Lloyd.  And Josh could, and probably should, have had a hat-trick; just failing to convert a one on one with the Bashley Town keeper after seven minutes and then placing a header straight at the ‘keeper having been found, unmarked, in the centre of goal by a cross from Dan Stewart on twenty four minutes.

Everything seemed set for a serene passage to the next round, when, inexplicably, the Town allowed Bashley to get back into the game, eventually conceding a sloppy equalizer when Town ‘keeper Richard Ossai was beaten by a Bashley striker at the back post.

What then followed were two events that should have seen the game safe for Farnham.

First, following an absolutely obvious foul by Kayode Conteh, the Town defender was merely sent to the sin-bin for subsequent dissent.

Then, the Bashley left back was shown a second yellow card for a petulant kick out at a Farnham Town player on the halfway line.

The tie was there for the taking, but, not for the first time, the Town failed to take advantage.

A man to the good, Farnham Town huffed and puffed for forty five minutes without creating a clear opportunity.  Worse still, each substitution seemed to unsettle the Town players more than a Bashley Town side who never seemed likely to concede a second goal.

Which left us with the lottery of a penalty shoot-out.

Penalty shootouts are our nemesis.  I’ve actually lost more of them than I have games over 90 minutes while I’ve been in charge.

I thought the game was of a very high standard. I knew that Bashley would probably provide us with our stiffest test, and so it proved.

Over 90 minutes, I thought that the draw was about right, with us edging the first half and them the second.

In fact, them going down to ten men for the second half had a bigger impact on us than it did them.  We didn’t retain the ball long enough in the final third to give ourselves the platform to build from and the game became very stretched.

We didn’t play as well as we could against a good opponent, but we are more than holding our own against strong Step 5 sides.

We are going in the right direction very quickly. It wasn’t our best day, but there were plenty of positives to take from the match.

Remember, we didn’t lose over 90 minutes, so our little run continues to develop momentum.

It’s another case of what could have been that the Town must consign to history before they travel to Redhill in the league on Tuesday.

The Town’s next home match is the league match against Banstead Athletic on Saturday 02 October.  Kick off 3:00pm 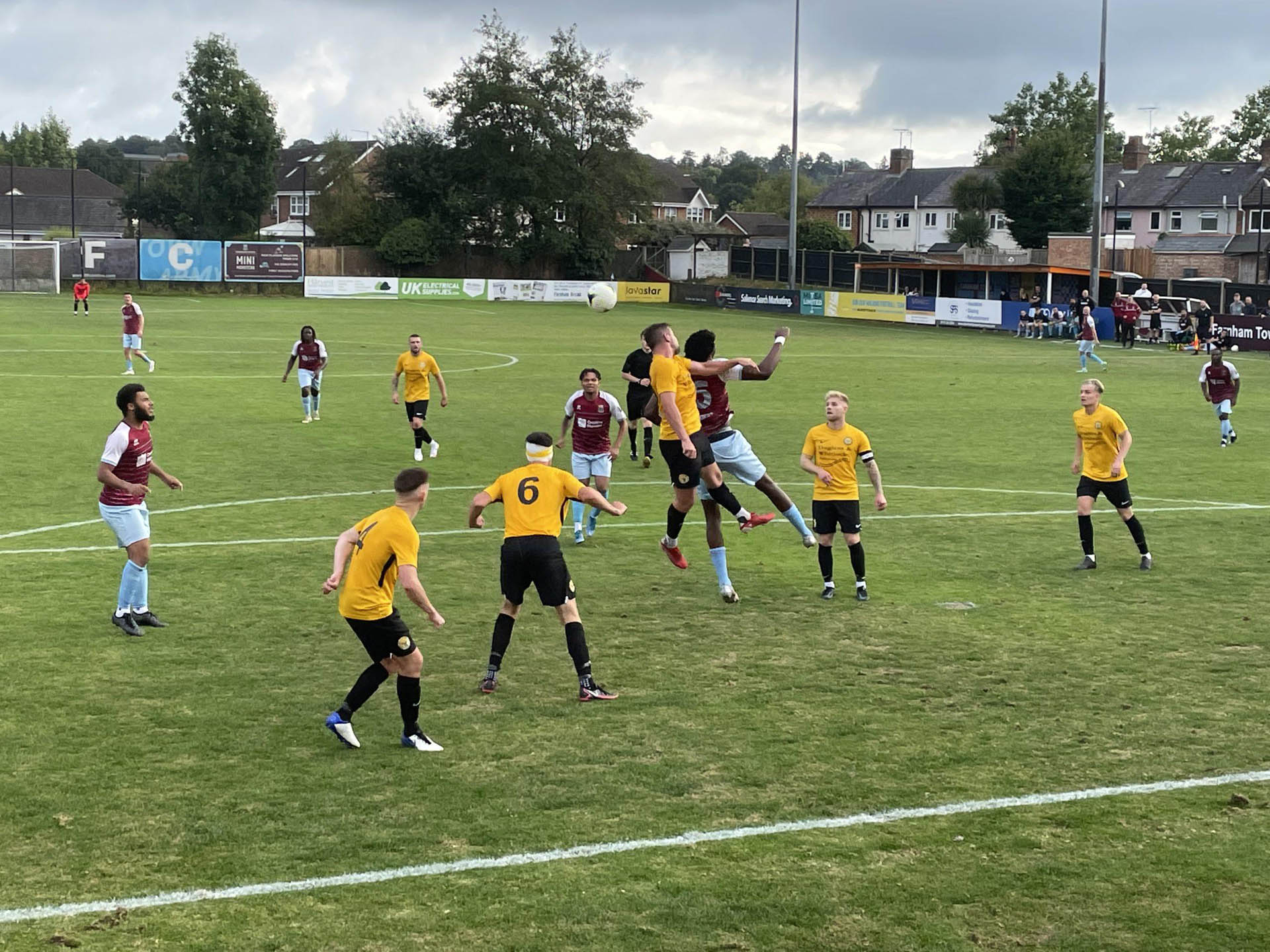