It’s Sheer Agony For The Town

Sheerwater Score Late To Take All Three Points With A 2-1 Win.

Following Farnham is much like Forrest Gump’s famous box of chocolates.

“You never know what you’re gonna get.”

Just three weeks ago, the Town stuck six past Frimley Green and, four days later, put four past Fleet Town in a display that, at times, threated to blow the opposition away.

This was more like a replay of Tuesday night against Rayners Lane.

And this time, one in which Farnham weren’t able to hold on to their lead.

Just like on Tuesday night, Farnham began brightly and deservedly took the lead after 20 minutes when Arsen Ujkaj turned home a fizzing cross from Owen Dean.

However, things had already begun to go wrong.

Shortly before the Town had taken the lead, full back Max Meaton had suffered a reoccurrence of his hamstring injury, requiring him to be replaced by Joe Sowden who, in turn, was forced to play out of position at right back.

Slowly Sheerwater began to take the initiative and Farnham were fortunate to retain their lead at half time after ‘keeper Gary Ross had palmed a Sheerwater corner into his own net, only for the referee to disallow the goal for an offence that was invisible to everyone else in the ground.

Despite the best efforts of Josh Ogunseye, frequently cutting in from the right to trouble the Sheerwater defenders with his left foot shots, the Town did little to trouble Sheerwater in the second half, with Max Blackmore starved of any real opportunity to extend his scoring streak.

With Sheerwater now in the ascendancy, it was no surprise when they finally breeched an increasingly shaky Farnham back four to set up Anthony Ogbanufe to score their equaliser through a smart shot on 53 minutes.

It was now a question of whether or not the Town could hold on.

Unfortunately, the answer came in the 86th minute when a neat backheel set up Ogbanufe to score his second.

A disappointing defeat, but the Town are a team in transition.

Whether through necessity or design, manager Tony Reid has been trying out different partnerships over the past few games; in his centre back pairing, in central midfield and among his forward line.

When it has clicked, as it did against Frimley, Fleet and Jersey Bulls, the results have been spectacular.

But not everything will work.

Revolutions do not, in fact, happen overnight.

They require perseverance.  And belief.

Tony and his team have done a lot right since joining Farnham Town.

There will be setbacks.  Days like these when the performance is under par and results go against us.

What matters now is our next two games, both against teams who top their respective tables.

The Town are away at Hanworth Villa on Tuesday night in the Cherry Red Records Premier Challenge Cup and then we travel away again to play Beckenham Town in the league next Saturday afternoon.

The Town’s next home match is in the Aldershot Senior Cup against Hartley Wintney on Tuesday 15 February.  Kick off 7.45pm 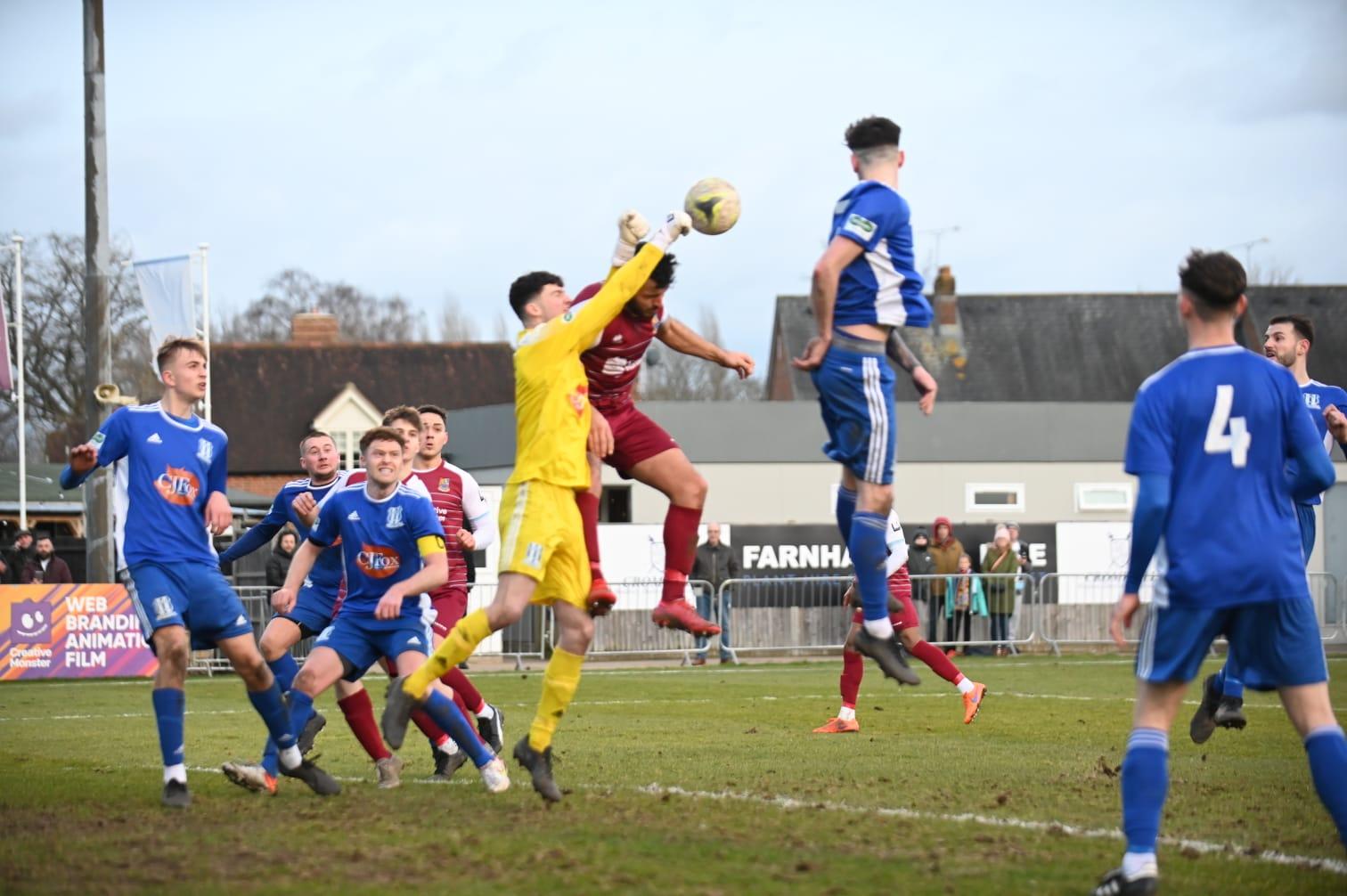